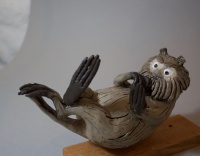 I was commissioned to make a series of sculptures for the new Moominvalley series.

They had many uses in the end, but primarily they were made to see how the characters looked in extreme positions, and became very important to Steve Box the director to 'get to know' the character in a physical space, so having them around as he was writing the series with Nick Ostler and Mark Huckerby was invaluable.

After sculpting each one I painted them in acrylic paint, this was mainly to protect them against dust and drying out, but it also made them look really lovely.

They were scanned in 3d very early on in the production and the files sent to Kuala Lumpur, here they were up loaded into 'mia' an animation program, and used as a guide for the CGI characters.

The originals were kept for the story boarders to refer to for a couple of years, and in the spring of 2019 I took them in hand luggage to Tampere in Finland to be on exhibition in the Moomin Museum.

All images of the models are used with the permission of Gutsy Animations.